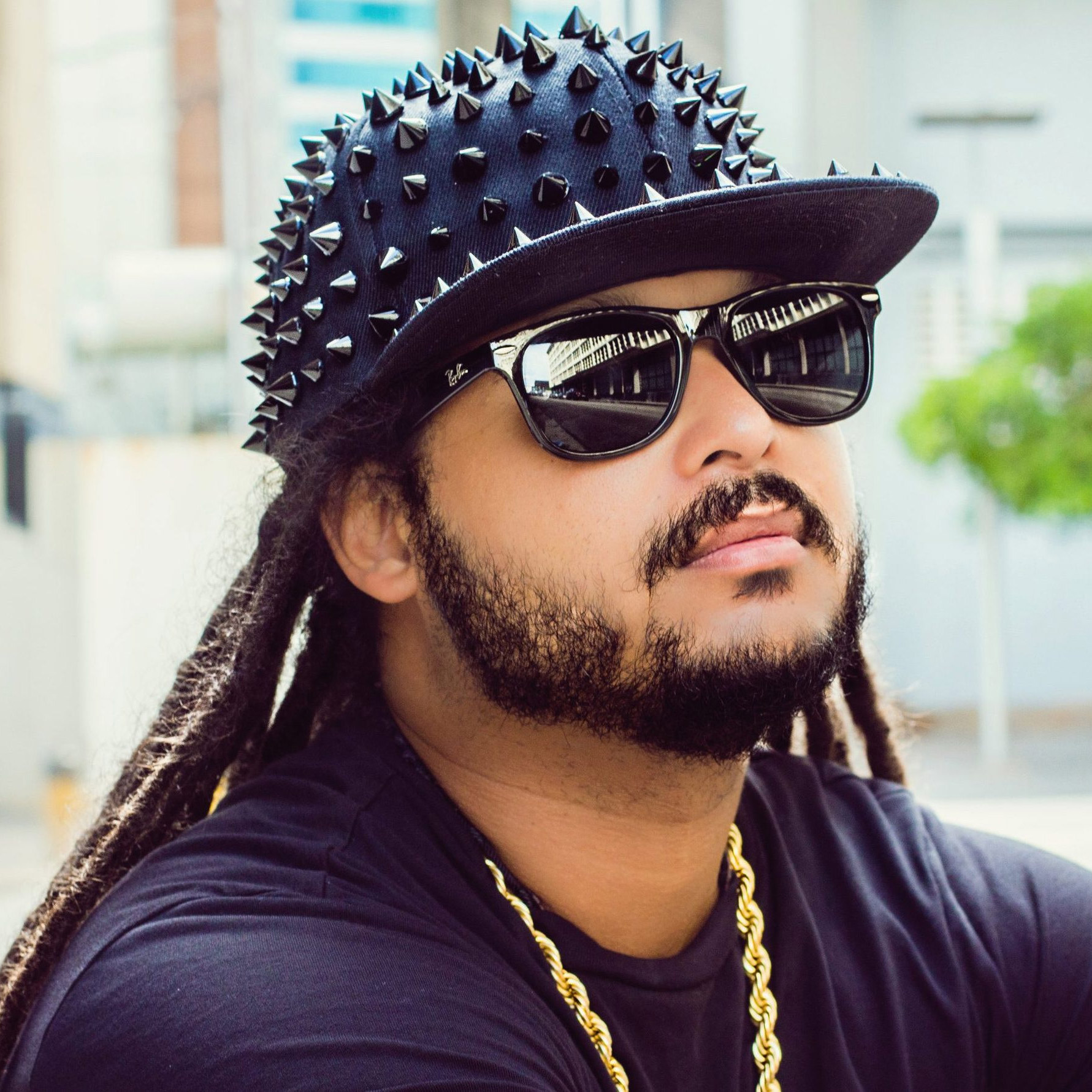 “I think a revival of re-centralization of Port of Spain would be good, but I am uncertain the infrastructure can handle this. Traffic and parking is already a terrible problem when having to go into the city. You have caught me at a time in my life where I work from home and value the time that I waste. We are in the modern world. A laptop and cellphone is all you need to get your job done” – MM

Michael Mooleedhar is an award winning director, living and working in Trinidad and Tobago. acla ARCHITECTURE picks his brain with 7 questions on design + working with and in Port of Spain 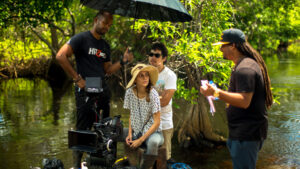 BTS of Green Days By the River Photo Source: https://www.greendaysbytheriver.com/gallery

ACLA architecture: Was there a trigger that propelled you into film direction and production. What was your mission at the outset?

MM: Looking back on when I started in film I am very uncertain if I actually knew what I was doing. I fell in love with storytelling in my form 6 literature class. I remember being amazed by the writings of Derek Walcott and William Blake ‘Songs of Innocence and Experience’. This was also the time when I was an usher at Movietowne. I would watch all the movies and always think I could do that better. I feel both these experiences had huge impacts on me becoming a filmmaker. At that moment I did not think it was really an option. The UWI Film Programme would in some ways make it real as at that moment I was looking for a degree to do, film production and film studies was about to be offered for the first time at the University. I truly believe my mission from the outset was to find something to do with my life that felt meaningful, which didn’t mean I had to be in an office all day, was creative and would allow me to travel the world. Film began to offer each of these and an artistry that I didn’t think existed within me until I began making films in film school. 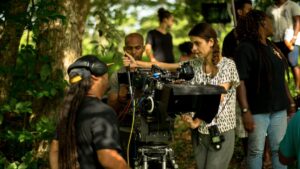 BTS of Green Days By the River Photo Source: https://www.greendaysbytheriver.com/gallery

ACLA architecture: “Inspiration is highly overrated. If you sit around and wait for the clouds to part, its not liable to ever happen. More often than not, work is salvation.” – Chuck Close. What is your feeling on inspiration and how it comes about?

MM: Inspiration is a term which can be confusing. People always ask what inspired you? It is actually a very hard question to answer. At the beginning of any project one might be able to use the word inspired, maybe the inspiration is in the idea? But in film, the work is so hard that the feeling of inspiration quickly becomes the reality of a daunting task ahead. Making a film is like climbing ‘Everest’ I would say. We do it because it is there to be made. There are moments of inspiration, highs and lows. But overall I think the fuel is passion and creating work that can stand the test of time. That being said how it works for me is a process of internalizing the film. Each process is critical in pre-production. I think beyond the work we are also preparing the mind, body and spirit for the journey. In production the actual execution of the film, there is a moment I call “the flow.” It usually takes me about 3 days to really focus-in on it; this is when you are making decisions without too much thought, you know what you are doing, the ideas flow and there is a oneness with what you are creating. It also begins to inform your decision making. In some ways, the film begins to take on a life of its own and tells you what it needs. This process is often a very enjoyable one and can be considered inspiration, I think it is a result of the preparation and an understanding of what one is creating. Call it what you want, inspiration, passion, creativity – the process is all hard work to get to the journey’s end.

ACLA architecture: Do you see a correlation between your surroundings and design?

MM: I believe I stumbled across the importance of design. My masters degree was in Creative Design Entrepreneurship at UWI. We studied design thinking which opened my mind to solving problems through design. Our surroundings must affect our design and I believe our designs in turn will also affect our surroundings. A simple thing as a nice space to do work can greatly improve productivity. It is all interconnected the way I see it. Design should be taught in high school, we should be trying to raise a society more in-tune and aware to its surroundings. In theory how well an idea, product or even country is designed will affect its ability to be successful. A great passion for design can influence success directly. I love design and design thinking. 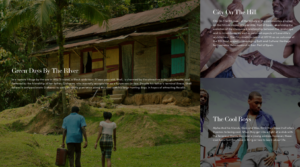 ACLA architecture: You’ve worked in the city of Port of Spain, how influenced are you by the city? Do you attribute your surroundings to your success? If so, how?

MM: The city of Port of Spain…my favorite street is Charlotte Street. The colour, the smell, the activity it feels so alive to me. I went to St. Mary’s College in Port of Spain and have worked in the city. I even had a store in Town Centre Mall. We made a film titled ˜City On The Hill”, which is about the ‘Built Cultural Heritage of East Port of Spain’. The capital is the heartbeat of the country, and I have always felt during the day it feels like a city but at night it becomes a ghost town. I have always felt more could be done, to make use of this space. The city naturally has influenced me, it has made me understand we are an island with big hopes and dreams. I see it in our capital trying to grow as we experience hard economic times. We are products of our surroundings. I think my country has given me the tools to be successful and I have tried my best to turn these resources into success. In the film, ˜Green Days by the River”,  my resource is the land, the people, the talent and the story. We have put all this together to make a beautiful film.

ACLA architecture: You’ve been immersed in both low density and high density populations throughout Trinidad in the making of your films Green Days by The River and City on a Hill, both of which nod to the city of Port of Spain. Despite its rich past, evidenced in its architectural fabric, Port of Spain has been losing its permanent population to suburbs for over 50 years now. Today our capital city is, for the most part, only alive during the daylight hours. Do you think that a revival + a re-centralization of POS can have a positive impact on its surrounding suburbs and our country as a whole?

MM: I think a revival of re-centralization of Port of Spain would be good, but I am uncertain the infrastructure can handle this. Traffic and parking is already a terrible problem when having to go into the city. You have caught me at a time in my life where I work from home and value the time that I waste. We are in the modern world. A laptop and cellphone is all you need to get your job done. As the capital city I think Port of Spain should bustle with life day and night. I know there are safety issues at night. I feel the timing isn’t right for this with our economic downturn. I think we should encourage entrepreneurship wherever it comes from. Port of Spain will always have business as it is a hub. The city itself needs to evolve and built better infrastructure to attract people to want to reinvest into the city. At the moment I enjoy going to many places besides Port of Spain to work.

ACLA architecture: When you think of Port of Spain, what is the first word or phrase that comes to mind?

MM: I think hot sun and traffic. I feel like I am usually going into an office in Port of Spain with a long line. So I probably am bracing to be frustrated.

ACLA architecture: What has been the biggest creative challenge of your career to date?

MM: My biggest career challenge has been having to create my own opportunities. As a film director we can be hired to direct work, for me this isn’t often the case. In a film like Green Days by the River the producer and myself created the project from scratch. I have often felt if I had to keep creating projects from scratch it would be too much work and I would burn out. While I enjoy being an entrepreneur it would be nice to have opportunities come to me. UWI has been one of the major companies that have allowed me to be a director for hire as I have done several documentaries for them. So it isn’t impossible but I would love some feature film opportunities.